Women say “no” to mining

Mining often has a huge and devastating impact on the environment, including water, air and forests. It can profoundly affect nearby communities, not only by harming local ecosystems, but also by exacerbating or provoking societal tension. In many places across the globe, women are leading resistance to mining and the ‘extractivist’ model that prioritises short-term profit over environmental sustainability and social equity.

Thanks to their participation in the Global Alliance for Green and Gender Action (GAGGA), several of Both ENDS’s partners in Asia have made incredible strides this year in linking grassroots and national organisations focused on women and mining. The first connections were made at the end of 2017 with a successful skills-share meeting in India co-organised by the women’s rights and ecological justice group Dhaatri; the Non-Timber Forest Products–Exchange Programme (NTFP–EP), a network active in South and Southeast Asia; and the Mongolian women’s fund MONES. Since then, the informal Women and Mining Asia (WAMA) Network has emerged. In 2018, skills shares were held in the Philippines and Indonesia. The organising group of the WAMA Network expanded to include Lilak, a group dedicated to supporting Indigenous women’s rights based in the Philippines, and the Mining Advocacy Network JATAM in Indonesia.

The WAMA Network has already helped ensure that the demands and voices of local women activists are heard far beyond the confines of their communities. At the Thematic Social Forum in Johannesburg, WAMA groups joined up with GAGGA partners from Africa and Latin America to share and learn from each other with the aim of strengthening respect for women’s right to say ‘no’ to mining. Plans were made for a workshop on how to ‘follow the money’ behind mining operations and for popular education materials to help build awareness among local communities. Both ENDS has already started to put these plans in motion.

One of the highlights of WAMA’s efforts in its first year took place at the United Nations Forum on Business and Human Rights in Geneva. The groups arranged for the participation of local women activists, including Sadhana Meena from Rajasthan, India, who spoke at the opening plenary. She emphasised the need for legal protection for communities from business-related harm. At a side event, Ms. Meena set off a Twitter storm when she succeeded in securing the statement from a Newmont Mining Corporation representative that the company would promise to respect a community’s rejection of a mine.

Both ENDS is helping raise awareness among policymakers and allies in the Netherlands of the impact of mining on women. At the end of the year, Both ENDS invited representatives of the Ministry of Foreign Affairs and members of the Women’s Rights and Mining Working Group to meet groups involved in WAMA and to hear their stories. The meeting made a significant impression on those in attendance.

Going forward, the Women and Mining Asia Network members will pilot a self-designed, user-friendly, gender impact assessment tool and invest in deepening relationships among the groups in the network. The next WAMA skills share, in Cambodia, is already on the agenda! 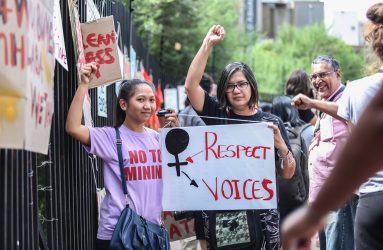 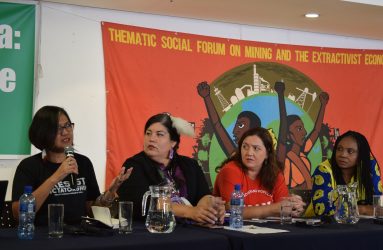 At the thematic social forum in Johannesburg 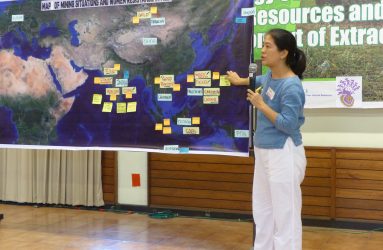 A meeting of the WAMA network 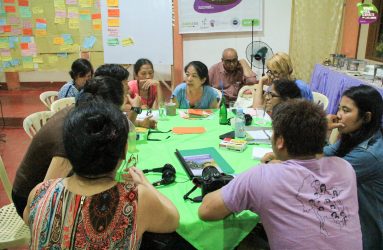 workshop in Indonesia with participants from the Philippines, Cambodia, India, Mongolia, Indonesia 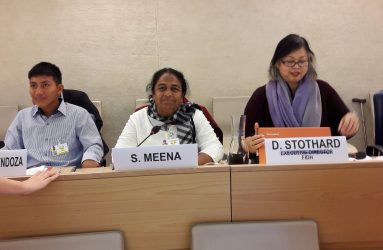 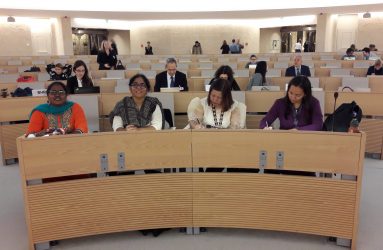