Both ENDS’s financial statements have been drafted in accordance with the Dutch Accounting Standard for Fundraising Institutions (RJ650, amended 2016). The annual accounts have been audited by Dubois & Co Registered Accountants.

The general reserve is a continuity reserve. It is designated to ensure that Both ENDS can complete or terminate ongoing projects in case of a significant shortfall of key sources of funding. The current general reserve of Both ENDS is 19% of the organisation’s operational costs. This is a sufficient amount to absorb fluctuations in cash flow. To be able to meet project obligations and, if necessary, legal and moral obligations in the event of a reduction in funding and/or dissolution of the organisation, Both ENDS is striving to raise the general reserve to 25% of the operational costs (approximately €635,000).

Almost all of Both ENDS’s revenue comes from project funding, which includes grants from governments or (inter)national funds. Projects may last one or several years. The strategic partnerships with the Ministry of Foreign Affairs started in 2016 and will run until 2021. Both ENDS did not have substantial income with a non-recurrent character in 2018 nor had any income/expenses from previous years which have affected the result.

Both ENDS does not invest the reserves of the Foundation.

The reserves of the Joke Waller – Hunter Initiative Foundation are invested. The portfolio is 100% sustainably invested. These investments are based on a defensive strategy and performed by Triodos Bank. The aim is to keep an almost constant fund. Every year the Board of the Foundation determines the maximum amount of withdrawals from the fund. The Board of the Joke Waller – Hunter Initiative Foundation decides on changes in the investment policy. Triodos Bank reports every quarter on the investment results.

The composition of the portfolio at 31 December 2018 is: 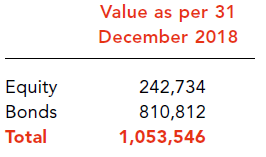