Around the globe, civil society organisations are engaged in local initiatives to help people and environments adapt to climate shocks and changes. Women are at the forefront of local efforts to protect and restore ecosystems, increase community resilience and ensure the right of all community members to actively participate in decision-making about the environment.

Despite the importance of local climate action, the vast majority of climate finance is channelled to (and through) big institutions and large-scale projects, often without taking into account the wishes and interests of local communities. The vital work being done by local actors, especially work led by local women, is woefully underfunded; their role in climate finance decision-making is extremely limited.

Both ENDS is working with diverse partners worldwide to address this problem, with a special focus on the Green Climate Fund (GCF), a global fund created to support the efforts of developing countries to mitigate and adapt to climate change. We collaborate with partners to strengthen awareness and knowledge, and increase engagement of locally rooted actors in both national and international processes of the Green Climate Fund.  During GCF Board Meetings, Both ENDS and partners – as part of the civil society active observer team – are advocating for gender-responsive projects and policies that take into account local communities’ and women’s interests.

Because decisions about Green Climate Fund finance are shaped by national priorities and plans, it is vital that these take into account the specific needs and initiatives of women, address gender-specific climate impacts, and support gender-responsive climate projects. Both ENDS is helping grow a global network of country-level and international-level GCF gender monitors to ensure that gender is taken into account in all aspects of Green Climate Fund decision-making. For example, GAGGA partner MONES, the Mongolian Women’s Funds, started to actively engage in GCF decision-making in Mongolia and has established a good relationship with the Environmental Protection Fund, the GCF National Designated Authority, to bring gender expertise to GCF-funded projects in Mongolia.

Both ENDS is also helping build awareness about women’s rights and climate finance among a broader audience. In collaboration with WEDO (Women’s Environment and Development Organization), we organised a five-part webinar series aimed at increasing participants’ knowledge and power to ensure that climate finance respects women’s rights, responds to women’s needs, and benefits local women’s groups.

At the international level, Both ENDS joined with several partners to collectively advocate for enhanced local access to climate finance. We organised and participated in a panel discussion during the Adaptation Futures Conference in Cape Town, providing clear recommendations to GCF and other climate finance policymakers. These were echoed in a joint publication launched at the conference, Local actors ready to act: six proposals to improve their access to the Green Climate Fund. Seated at the table alongside Both ENDS were representatives of the GCF Secretariat and the Netherlands Ministry of Foreign Affairs, as well as our partner, African Women’s Development Fund (AWDF). As a well-established women’s fund with close ties to women’s rights organisations across Africa, AWDF is a perfect example of a locally rooted actor that could direct climate finance where and to whom it is most effective and needed. Throughout 2018, we supported AWDF to attend GCF board meetings and secure accreditation as an official CSO observer. Going forward, we will support AWDF as it explores the most promising avenue to ensure that GCF finance reaches women-led climate action. 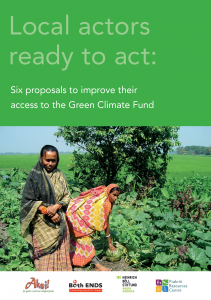 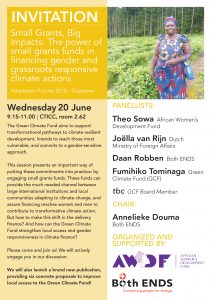 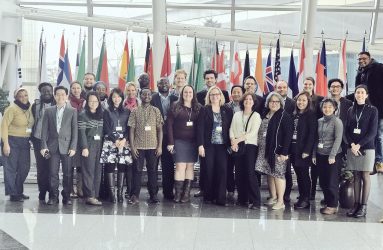 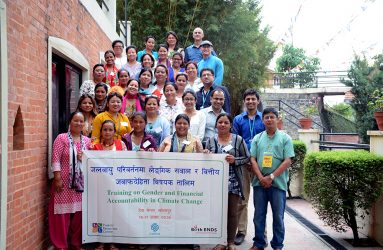 a grassroots women's group in Nepal 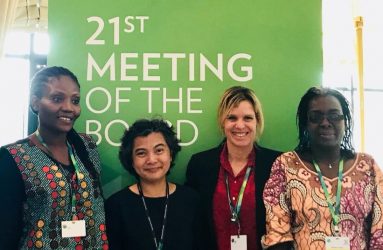 How we work: Shining a spotlight on small grants funds

Women’s funds like MONES and AWDF provide relatively small yet vital grants to women’s rights groups to protect and improve the environment and their living conditions. Both ENDS is the co-founder of a number of small grants funds and works closely with funds that focus on the environment, human rights and women’s rights, including a wide range of partners in the Global Alliance for Green and Gender Action (GAGGA). GAGGA partners are active at local, national and regional levels in more than 30 countries worldwide. Both ENDS and our partners are calling on financial institutions, donors and funds – including the Green Climate Fund – to ensure that financing is accessible and available to small grants funds, who in turn can ensure that money is directed to those who need it the most and know best how to use it.

Read more about the impacts of small grants on our website.