Women and water in the shadow of oil palm plantations

Women’s rights, water quality and oil palm plantations. They may seem like unlikely topics to bring together, but for women in the riverside villages of Semanga and Simpang Tiga Sembelangaan in West Kalimantan the relevance is clear. Healthy watersheds and access to local water supplies are vitally important to women and girls in the area, as they are typically in charge of managing household water supplies, sanitation and health. When water becomes scarce or unsafe for drinking, cooking or washing, women and girls suffer first and foremost. They may be forced to dedicate more of their limited time, energy and economic resources to obtaining clean water for themselves and their families, as well as dealing with the health impacts of exposure to contaminated water.

IMPACT ON WATER AND WOMEN

The landscape around West Kalimantan has undergone rapid changes in recent years, as lush forests have been replaced by large monoculture palm oil plantations. It is well known that increasing demand for palm oil is driving environmental destruction, land grabbing and labour rights abuses in Indonesia. Less understood are the impacts of the industry on water and women specifically.

A new initiative in Indonesia aims to explore these connections. The idea was developed in 2018 when Both ENDS brought together three Indonesian organisations with a shared interest and complimentary experience on these issues. ECOTON (Ecological Observation and Wetlands Conservation) specialises in participatory and integrated water management, while Gemawan is a women’s rights organisation working with communities affected by palm oil plantations. ELSAM (The Institute for Policy Research and Advocacy) is a national expert on human rights issues in the palm oil sector. Together with Both ENDS, the three groups have set out to learn about gender-specific impacts of palm oil plantations, particularly impacts on water resources, and to build the capacity of women in impacted communities to advocate for gender-responsive approaches at local and provincial levels. The project will also contribute to proposals at national and international levels for policy and regulatory reform of the palm oil industry.

The project got fully underway in 2019 as GEMAWAN and ECOTON gathered a detailed picture of the situation, including the gender dynamics, economic activities and livelihoods in the two villages. Women’s groups have been set up and trained to monitor river water quality and regularly update the community via public noticeboards. The women in Semanga call their group KUMPAI, after a tall grass that grows in the shallow waters of the river.This data is not only vital for the health of community members, but serves as evidence needed to convince local policymakers and other stakeholders about the impacts on the communities of the change in their rivers’ health.

Information was also collected about the pesticides and fertilizers used on nearby plantations, and the occupational health and safety conditions of the plantation workers (also men and women from the target communities) who apply them.

Although the project focuses on the impacts of palm oil plantations, it takes a holistic approach to the situation in the communities. Awareness-raising and trainings on sanitation, household and community waste issues, such as how to safely dispose of nappies and other plastic waste, laid the groundwork for new approaches that can help improve water quality. GEMAWAN and ECOTON are also supporting the communities in exploring possibilities for organic agriculture and agroforestry. Both activities could be potential sources of income to support families who previously made a living by fishing in the rivers, but who have been forced to find other sources of income since the fish population has plummeted.

Two members of the Semanga women’s group test the level of heavy metals in the surface flow of the Sambas River. 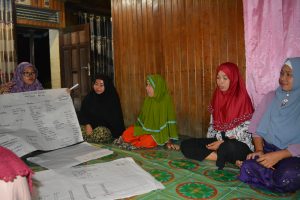 A member of Kampai updates the public notice board with today’s results.

Cooperation with ELSAM has helped bring GEMAWAN and ECOTON into the ongoing dialogue around human rights and sustainability issues in the palm oil sector. The groups have taken part in Indonesia’s NGO caucus on the multi-stakeholder Roundtable on Sustainable Palm Oil (RSPO). On the international level, Both ENDS makes sure the groups are able to connect with other organisations in the region and participate in relevant forums, such as a skills-share organised in Bogor on communal land rights issues in Southeast Asia.

The story of women, water and palm oil has just begun, but the innovative collaboration of GEMAWAN, ECOTON and ELSAM has already set in motion positive change and hope among women in the villages. In the words of one member of KUMPAI: ‘The pollution needs to be stopped somewhere and it can start with me. I hope to see the fish return and that people will stop throwing their garbage into the river. Being part of KUMPAI is key to achieving that.’ 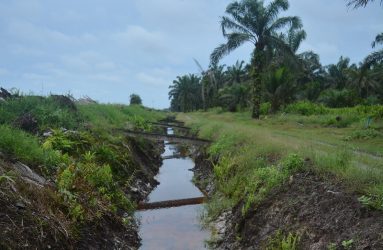 Drainage canal in an oil palm plantation near Semanga 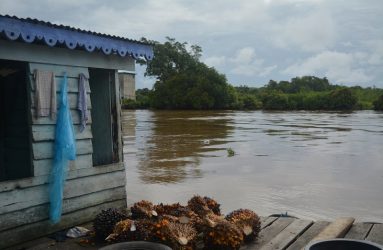 Semanga is built along the banks of the Sambas river 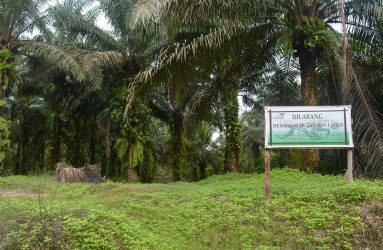