A Senegal community beats back coal

About 15 kilometres east of Dakar, in Senegal, lies the small hamlet of Bargny. With its ocean waters, sandy beaches and abundant sunshine, Bargny has for generations been the perfect place for catching and drying fish. But the construction of a coal-fired power plant, known as Sendou, has cast a long shadow over the community in the area.

For several years, the Senegalese organisation Lumière Synergie pour le Développement (LSD) has  supported residents of Bargny, organised in the local organisation Takkom Jerry, in their opposition to the plant due to its adverse social and environmental impacts. These range from women’s loss of access to their fish drying area to eviction, and from air pollution to an increase in water temperatures that could ruin fish habitats. A new coal-fired power plant would also undercut international efforts to reduce carbon emissions and halt climate change. Rising sea levels are already evident in Bargny, where the ocean is creeping ever closer to people’s homes.

In 2016 Both ENDS supported partners Takkom Jerry and LSD in taking the community’s case against the plant to the African Development Bank (AfDB) and the Dutch Development Bank FMO, which both helped finance the contested plant. Among other things, the complainants challenged the lack of community consultation and compensation for loss of land, in violation of the banks’ policies.

The FMO complaint was one of the first to be processed by the bank’s independent accountability mechanism, which was developed and put into place upon the recommendation of Both ENDS and SOMO, a partner in the Fair, Green and Global Alliance. Both ENDS and SOMO have closely monitored the mechanism’s handling of the complaint.

In 2017, as a first step in the complaint process, the Independent Expert Panel of FMO’s accountability mechanism issued a report confirming many of the concerns raised by Bargny residents. The report recommended that FMO engage with the plant owner on a number of key issues, including addressing water, air and marine impacts, land rights issues and clarifying circumstances around fish drying grounds, which fall within the plant’s ‘buffer zone’ of restricted economic activity. Access to the drying grounds are of critical importance to the livelihoods of some 1,000 fisherwomen.

While the problems around the plant are by no means resolved, the complaint has led to some positive changes. Most significant, in July 2019 the plant ceased operating and there is hope that it will be converted to gas, which causes less pollution than coal and is therefore preferred by the Bargny community. The complaint also triggered technical improvements to the plant to reduce thermal pollution in the area’s seawater and increased engagement by FMO, the plant company and local authorities to resolve land rights. Although the situation for the fisherwomen remains unclear, they have been able to maintain access to the grounds and the Independent Expert Panel continues to closely monitor their situation.

Both ENDS has contributed to further research into the plant’s impact on the fisherwomen by LSD, along with WoMin and Gender Action – two partners in the Global Alliance for Green and Gender Action. A report by the group adds to the growing evidence that development banks are not adequately addressing women’s rights and gender in their social and environmental policies, procedures and guidelines.

Both ENDS’s technical and financial support to Lumière Synergie pour le Développement on the Sendou complaint contributes to the broader aim of transferring knowledge and experience on development bank complaint mechanisms to partners worldwide. On that count, the story is a resounding success: LSD is playing a crucial role on the topic in civil society networks in Senegal and the Africa region, including via the Coalition of African Civil Society Organisations on the African Development Bank. Since the Sendou complaint, LSD has taken the lead on filing another complaint in relation to a rail project funded by the AfDB. Meanwhile, the group continues to work with Bargny residents and Takkom Jerry to strategize about the future of the Sendou plant. 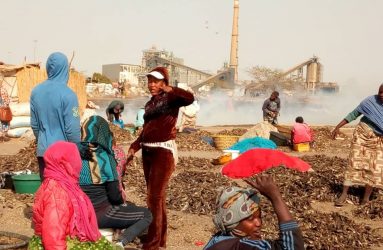 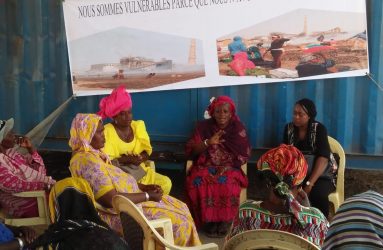 Campaign meeting of women in Sendou, who fight against a coal-fired power plant financed by development banks FMO and AfDB. The plant ceased operating in 2019. 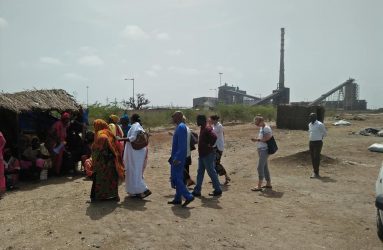 A delegation of FMO visits Sendou 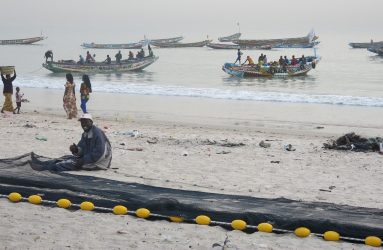 Fishermen on the beach of Bargny, Sendou, Senegal 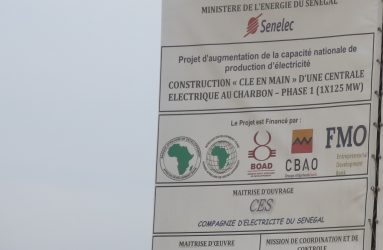