To achieve our vision of a sustainable, fair and inclusive world, Both ENDS works to empower civil society, to change the system so it prioritises people and the planet, and to support transformative practices. The numbers and successes below together show the broad variety of our achievements along each one of the three pathways.

Both ENDS works with civil society organisations around the world. We support them financially, but also engage in joint strategising, mutual capacity development and collective advocacy efforts. Our partner network embraces the whole world. The map below shows where our partners are situated; their activities might cover even more countries:

In order for systems to prioritise people and the planet, Both ENDS and partners aim to change the system step by step, policy by policy. Where policies are already strong, they need to be implemented, and where they are absent, we advocate for new ones to be enacted, on all levels:

According to Both ENDS and partners, transformative practices are the future. There are many of these bottom-up, planet-friendly practices. Below some numbers of a selection of practices that many of our partners work on. Also important is to take into account the gender aspect of these practices, in order for men and women to benefit equally: 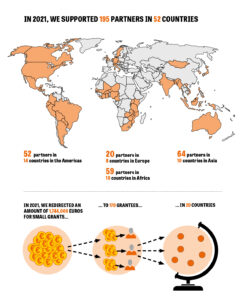 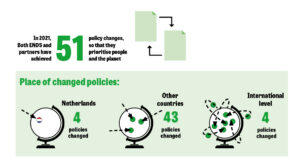 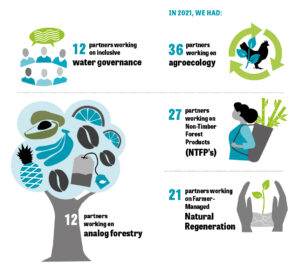 SOME EXAMPLES OF OUR IMPACT IN 2021