Effective management of water resources is a complicated task. It requires attention not only to the wide variety of water users and uses, but also the ecosystems through which water functions and moves.

In Africa, for example, the Nile Basin encompasses more than three million square kilometres in no less than 11 countries. It is home to 238 million people. Increasing their engagement in the management of the basin is the goal of the multinational NGO, Nile Basin Discourse (NBD), one of twelve members of the AfriWater Community of Practice (CoP) which was formed in 2014 with the support of Both ENDS. In six basins in East and West Africa, members of the AfriWater CoP are actively enhancing participation of communities in IWRM processes using the Negotiated Approach. They are also using an ecosystem perspective which integrates management of water with that of land and other resources for the purposes of both sustainable use and conservation.

In 2015, AfriWater CoP members shared their perspective with policymakers, pressing for full implementation of the policy framework Africa Water Vision 2025, which outlined the coordinated development and management of water, land, and related resources geared toward equitable and sustainable use. In 2015, AfriWater CoP caught the attention of key decision-making bodies and stakeholders, including the African Ministers’ Council on Water (AMCOW), which acknowledged the value of the network’s perspective on river basin management.

At the World Water Week in Stockholm, Serah Munguti, from AfriWater CoP member Nature Kenya, addressed a meeting of international donors, sharing the group’s remarkable success story in the Tana River Delta: the group’s efforts to raise awareness about the risks of proposed biofuel production in the area ultimately resulted in a comprehensive land and water use plan.

Along the way, the group succeeded in securing designation of the Tana River Delta as a Wetland of International Importance under the Ramsar Convention. This inspirational case is one of several featured in AfriWater CoP’s report, Beyond the flow: Building strong communities and resilient basins in Africa, published in October with the support of Both ENDS. 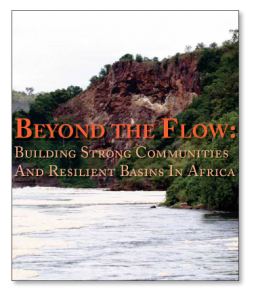 AfriWater CoP also developed fruitful relationships with the UNESCO-IHE Institute for Water Education and the African Network for Basin Organizations (the regional network of local water authorities). In 2015, the network was involved in project proposals with both groups. The AfriAlliance proposal, led by UNESCOIHE, was awarded funding from the European Union’s Horizon 2020 research and innovation programme. The project, which will run from 2016 to 2021, involves 16 EU and African partners, including scientists, decision-makers, practitioners, and other key stakeholders who will work together in the areas of water innovation, research, policy, and capacity development. AfriWater CoP is the consortium’s only civil society organisation, and brings to the table its unique expertise in ensuring bottom-up community involvement in water management.

To address the Indonesian water crisis, Both ENDS and three Indonesian organisations – Yayasan Mitra Insani in the Kampar River Basin, Komunitas Peduli Ciliwung (KPC) Bogor in the Ciliwung River Basin, and ECOTON in the Brantas River Basin – teamed up to form the IndoWater Community of Practice (CoP) in 2014.

The Indonesian groups, like their counterparts in Africa, have extensive experience working with communities. By working together and sharing their learning in the CoP, they aim to develop and improve their efforts toward participatory integrated river basin management in Indonesia.

IndoWater CoP got fully underway in 2015. At a workshop in March, the groups clarified the aims and the principles of the network, and initiated an analysis of the Indonesian legal framework as it relates to IWRM. The groups also conducted an inventory of existing initiatives, evaluating their effectiveness and documenting lessons learned. The inventory included both formal governmentsponsored platforms, and informal communitydriven platforms that give communities a role in decision-making and action around management of water resources. IndoWater CoP’s findings are featured in a detailed report and short film, due out in early 2016.

In the summer, IndoWater CoP met again to develop a structure and a plan to expand its membership, and to identify a focus for the coming years: Indonesia’s water problems are simply too big to tackle all at once. Water pollution will be the key issue for the network, with a particular emphasis on contamination from chemicals found in plastics, pesticides, and medicines which are known to interfere with the hormone system of humans and wildlife, including fish.

At the local level, IndoWater CoP members made use of Both ENDS’ Livelihood Analysis and Activity Analysis Guide, a tool to help gain insight into the economic activities and the variety of stakeholders in a particular basin, and to place problems of local communities in broader geopolitical and geo-economic contexts, such as global trade in palm oil, and pulp and paper. Both ENDS is supporting IndoWater CoP with these and other capacity building tools, sharing lessons from the use of the Negotiated Approach in other countries. 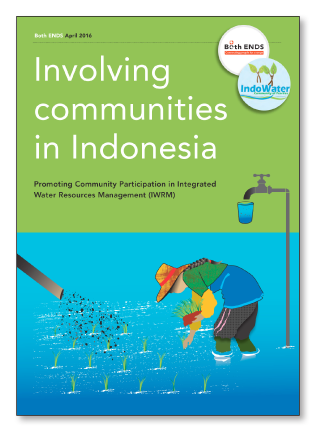 Both ENDS is also facilitating connections between IndoWater CoP members, and scientists and experts like Deltares, an independent institute for applied research on water. In 2015, the groundwork was laid for formal cooperation between Deltares and Both ENDS to see how the Negotiated Approach could complement Deltares’ model for assisting local governments in water management.

An overview of our water related projects

This is a short overview of the titles, the funders and the project partners of water related projects Both ENDS worked on in 2015.

NAME OF PROJECT: ‘Promotion of the Human Right to Water and Sanitation’

FINANCED BY: NWO/WOTRO/UDW (Urbanizing Delta’s of the World)