International trade and investment agreements do a lot to determine the conditions under which global capital flows. Such agreements should contribute to economic growth and employment. Instead, their focus is often on lowering the bar on social and environmental regulation and protecting investors.

In 2015, Both ENDS contributed to a vitally important debate around international frameworks and rules for trade and investment. Much attention was given to the Investor-to-State Dispute Settlement Mechanism (ISDS), which is part of many bilateral investment treaties (BITs) and free trade agreements. ISDS allows foreign companies to demand financial compensation for ‘unfavourable’ government regulations. What’s worse, companies can bypass domestic law and take their claim to an international court of private arbitrators who are neither democratically elected nor appointed.

In cooperation with Fair, Green and Global Alliance partners, Both ENDS participated in several public events and awareness-raising efforts around ISDS, particularly in relation to its proposed inclusion in the Transatlantic Trade and Investment Partnership (TTIP) which is currently being negotiated between the European Union (EU) and the United States (US). 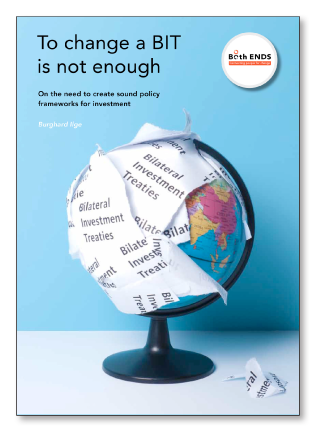 When the European Commission proposed an Investment Court to replace ISDS, Both ENDS teamed up with allies in the Seattle to Brussels network to publish a critical analysis of the proposal, which doesn’t address the fundamental problem: giving foreign investors the right to sue states for democratically decided laws.

Similarly, in the aptly named report To change a BIT is not enough, Both ENDS argued that mild reform of BITs, which include ISDS, is not enough to ensure that they contribute to poverty reduction, inclusive growth and sustainable development – elements of the newly agreed Sustainable Development Goals (SDGs). 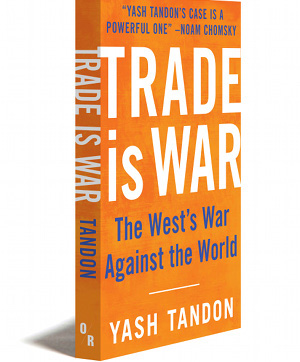 Both ENDS also played an important role in the collaborative civil society effort around TTIP, making sure that European and Dutch policymakers understand TTIP’s potential impact on developing countries. A bilateral agreement between the EU and US would mean a loss of trade preferences for developing countries, which could severely affect their economic growth. TTIP will also serve as a model for future agreements, so its content has far-reaching implications for all countries.

Both ENDS at the WTO Ministerial Conference

In December, Both ENDS accompanied the Dutch delegation to the World Trade Organization Ministerial Conference in Nairobi as an official adviser from civil society. Both ENDS monitored negotiations and conveyed civil society perspectives on key issues, such as the importance of preserving domestic food security programmes which benefit small farmers and producers, to Minister Ploumen (Foreign Trade and Development Cooperation) and the European Commission delegation.

Another key intervention was made earlier in the year when Both ENDS joined more than 130 NGOs in calling for a permanent exemption for least developed countries from WTO rules on intellectual property rights related to pharmaceuticals. Both ENDS helped succeed in securing Dutch support for the initiative and drawing attention to the broader problem of intellectual property rights for the world’s poorest countries, which are in sore need of access to affordable technology. In November, WTO members agreed to extend the exemption.