The spread of palm oil in Latin America

Linking and learning through a new network

Colombia, Ecuador, Peru, Honduras and Guatemala… the palm oil industry has its eyes on these countries. While Malaysia and Indonesia remain the largest producers globally, the tropical regions of Latin America are witnessing a sudden expansion of palm oil production. The crop is lucrative; the worldwide demand for the cheapest vegetable oil keeps growing, not least because it is also used for biofuels.

The controversial track record of the palm oil industry when it comes to deforestation and human rights abuses is well known. Both ENDS is part of the network of NGOs that mobilised international action on the issue. But remarkably little attention is being paid to the spread of palm oil in Latin America. In 2015, Both ENDS therefore conducted a scoping study on the continent. It showed that the problems caused by palm oil in Latin America are similar to those in Asia; however, the impact on human rights appears to be even worse.

The countries where palm oil is expanding all struggle with weak governance, and in many the human rights situation is plainly appalling. The large-scale, industrial production of palm oil heightens the existing conflicts over land and plays into the hands of large landowners, who in some countries have links with paramilitary forces. In Colombia, the forests where Afro-Colombian and indigenous communities live are cut down and communities are forcibly displaced without compensation given to those who lose their livelihoods and way of life.

In November 2016, Both ENDS together with the Forest Peoples Programme (FPP) organised a workshop in Bogotá for 32 people from 20 organisations working in 5 countries. It was their first opportunity to exchange regional experiences in a safe space, and was therefore highly appreciated. Many civil activists working on land issues in Latin America live under constant threat. Sticking your neck out for justice frequently means risking your life.

The aim of the workshop was to sow the seeds for a Latin American network of organisations on palm oil. And to link these organisations, which currently still work in isolation, to global networks and campaigns. There is a lot to learn from Asia about effective advocacy tools, and about international grievance mechanisms that exist specifically for communities harmed by palm oil. Two of Both ENDS’ and FPP’s partners from Indonesia joined the workshop to share their lessons.

An ambitious plan of action was drawn up: the participating organisation will set up a network organisation to join forces in fundraising, research, publicity campaigns and follow-up meetings. They furthermore have asked us for support in filing complaints through national legal procedures or through the complaint mechanisms of the Roundtable on Sustainable Palm Oil (RSPO).

In 2017, Both ENDS will start fundraising to support the budding Latin American network. Within the Netherlands, we will keep reminding the Dutch government of its commitment to the Amsterdam Declaration, which calls for a 100% sustainable palm oil supply chain by 2020. With only three years to go, the implementation of this agreement needs a serious boost. Not only in the emerging palm oil regions in Latin America and Africa, but also in Asia, where we have been aiming for more sustainable palm oil for decades. 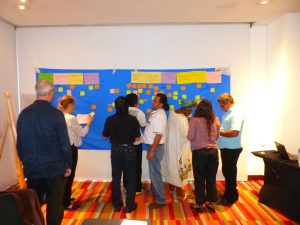 Participants of the workshop in Bogotá