A boost for young environmental leaders from the Global South

In the past ten years, 188 young environmental activists from over 50 countries received a grant through the Joke Waller-Hunter Initiative (JWHI). They use the award (between 2.500 euro and 7.000 euro) for educational programmes, internships or trainings that advance their professional aspirations.

Joke Waller-Hunter (1946–2005) was an influential person in the world of international environmental action, who served as the UNFCCC’s Executive Secretary. She left her estate to Both ENDS with clear instructions to use it for fostering dedicated, knowledgeable and skilful leaders for the environmental movement in the Global South.

The JWHI grants, modest as they are, often provide just that boost young people need to realise their commitment to environmental justice. Sandra Adéyêmi Freitas from Togo, for instance, used the grant for an internship at the renowned Senegalese NGO ENDA and to finish her Master’s degree in Environmental Diplomacy. She set up a successful environmental organisation in her home country and was the first woman in Togo selected to join the country’s delegation to the UNFCCC. Grantee Nang Shining used her grant to improve her English and finance the fieldwork for her Master’s degree. She studied three riverside communities in Thailand adversely affected by a hydroelectric dam. She then chose to make a difference at the grassroots level in her place of birth, a remote forest area of Myanmar. There she works towards raising the awareness of local youth groups on their rights and environmental justice.

The number of dedicated young people in the environmental movement in the south is fast growing. The JWHI is one of very few initiatives that offers some of them the opportunity to fulfil their potential and become future leaders.

FROM JWHI GRANTEE TO ANALOG FORESTRY PROMOTOR IN AFRICA

Periementah (Perry) Kutchoteh Ndzefemmegho from Cameroon used his JWHI grant in 2011 to attend a course on Climate Change Governance at Wageningen University in the Netherlands. Today, he plays a pivotal role in the African network for analog forestry that is supported by Both ENDS’ Rich Forests project. Analog forestry is a method to convert degraded soil into a man-made forest with a high degree of biodiversity. Analog forests provide the same ecological functions as a natural forest as well as valuable products for local farmers to use and sell.

Perry’s work with the environmental NGO CENDEP already focused on restoring degraded forest lands in the North-West Region of Cameroon. The course at Wageningen University deepened his understanding of the linkages between land governance issues at the international and local level. After following another course with the founder of analog forestry in Sri Lanka, he now trains and inspires Rich Forests partners across Africa. In 2015, Perry and his colleagues invited 14 organisations from 9 African countries to Cameroon, where Both ENDS supported the construction of experimental gardens, to exchange knowledge and strategies for their movement. Perry’s ultimate ambition remains to advocate for the protection of forested landscapes as well as improve the livelihoods of forest-dwelling communities. 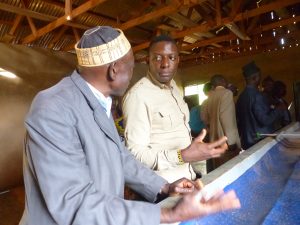 Perry at work in a tea factory in Cameroon

Perry is also starring in our video about Rich Forests, published in November 2016:

Lorena Ortiz Garcia, Mexico
FUTURE LEADER IN: indigenous leadership especially with respect to the role of women
ORGANISATION: Tonelhuayotzin Nuestra Raiz A.C.
GOAL: implement and share the acquired knowledge about food production, environmental protection, and the role of women in her village