Around the world, women are suffering from the negative impacts of large-scale projects such as dams, mines, and land conversion projects. In 2014, with support of the Dutch Ministry of Foreign Affairs, Both ENDS launched an innovative four-year project, Upholding human rights: Bridging the gender-environment divide, in cooperation with ActionAid groups in the Netherlands, South Africa, and Kenya; Indian partners Dhaatri Resource Centre for Women and Children and Keystone Foundation; and the Center for International Environmental Law, based in the United States.

The project aims to empower women and human rights defenders, especially to increase women’s participation in relevant local and national decision-making processes. It also aims to improve sustainable resource management and to further explore the potential of the human rights framework – especially the right to food, water, and a healthy environment – to enhance the position and protect the rights of women. It addresses the nexus between women’s human rights and sustainable development.

The foundation for the project was laid in the first year with a meeting of all partners to exchange experiences and develop a common understanding of the goals. Baseline studies and training on the human rights framework were also carried out. In 2015, the project has started to show concrete results: more than 3000 women and men have now received training about women’s human rights and the gendered impacts of large-scale projects. Around 25 women’s groups have been formed or supported to help make the voices of affected women heard and to promote their rights to water, food, and a healthy environment. Special attention has been placed on enhancing the skills of women to take up leadership roles.

She described how these impacts affect women more severely, as they are the ones responsible for the collection of firewood, water, and food for their families. They are also less equipped to stand up for their rights, and face greater risks in doing so. The dialogue was attended by Dutch Human Rights Ambassador Kees van Baar and representatives from the Dutch Ministry of Foreign Affairs’ Taskforce on Women’s Rights and Gender Equality, among others.

A key part of the project is to document specific cases in each partner country of women’s human rights violations and to pursue remedy in local courts or international human rights courts. A case in Kenya focuses on a Chinese coal mining project which would force at least 100,000 people from their ancestral land. In South Africa, the case involves a coal-fired power station and open-pit mine that is causing severe water and air pollution. In India, the focus is on forests, mining and national parks. Summaries of all three cases, including a gender analysis, were published in November.

Dhaatri has already achieved some successes using India’s Forest Rights Act, which recognises the forest rights of the adivasi, a historically marginalised forest dwelling people. Dhaatri has supported the filing of more than 500 individual and 40 community forest rights claims under the Forest Rights Act. They also managed to stop the planned eviction of adivasi communities to make way for the Panna National Park and Tiger Reserve. 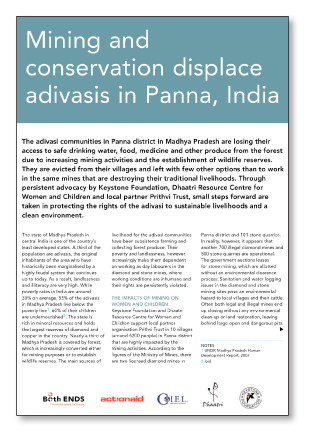 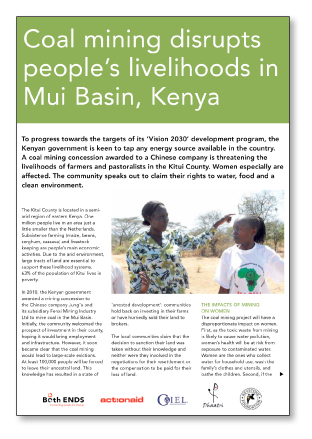 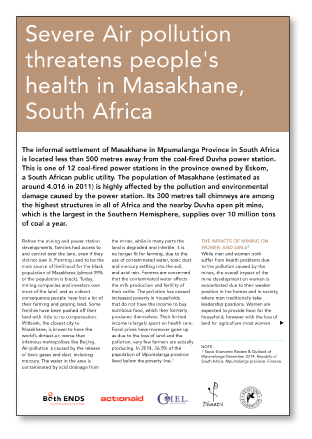